skip to main | skip to sidebar

I have an unhealthy addiction to Kinders 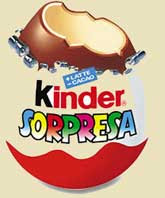 The Kinders I prefer are the long ones, filled with the white chocolate, or leche, or something. However, I do enjoy the kinder sorpresa (surprise) eggs filled with small choke-able toys. I think they are from heaven and I am unable to eat less than 3 at a time. (I'll be honest. Of the long ones. I don't eat three eggs at a time. I'm not a pig.)

Well, get this: a squirrel in Finland shares the love for kinders.

Reader below:
HELSINKI (Reuters) - A Finnish squirrel with a sweet tooth heads to a Finnish grocery shop at least twice a day to steal "Kinder Surprise" chocolate-shelled eggs.

"I named it the Kinder-squirrel, after the treats. It always goes after them, other sweets do not seem to interest it as much," the manager of the store in Jyvaskyla, central Finland, told Reuters.

The confectionary, which is intended for children, has a toy inside.

"It removes the foil carefully, eats the chocolate and leaves the store with the toy," Irene Lindroos said.

Unfortunately, the bushy-tailed thief does not clean up after itself, but leaves the wrappers behind, she added.

Squirrels have a well deserved reputation for being clever and adaptable animals. Many a home owner has seen the small rodents raiding their supposedly "squirrel-proof" bird feeders.

A toy inside? Awesome!

Do they sell these in the States? If so, I can just imagine the lawsuits. It's sad that we're such a lawsuit-happy nation. Even though the toy warning is probably printed right there on the package, some person would buy it, knowing what's inside of it, and proceed to sue the company over it. And win.
Sad.

This is a Deutschland treat. Kinder means Child.
Such as Kindergarten...which translates to Child Garden.

i am kylee. this is my blog.

My Most Popular Posts
EVER Written

Proudly a member of

What I have my ESTY eye on